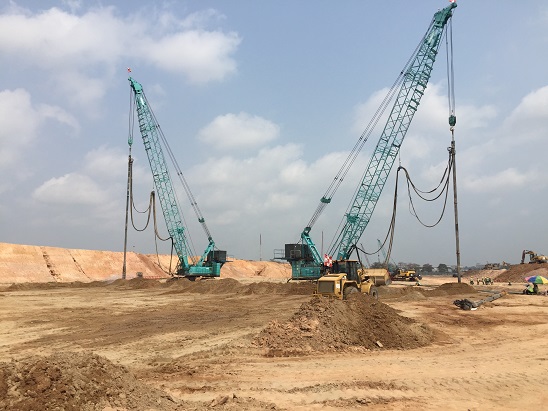 The ICE Hydraulic Vibroflot employs deep vibration technology to pack loose sand and or gravel more densely, increasing the density of the soil and its load bearing capacity. The two primary deep vibratory techniques are generally known as Vibro compaction and Vibro Replacement and both are offered by ICE. ICE offers the V180 and V230 model to suit differing soil types.

Vibro Compaction is a deep compaction technique for densifying granular soils with less than 10 – 15% silt present. Under the influence of simultaneous vibration and saturation, loose sand and or gravel particles are repacked into a denser state and lateral confining pressure within the soil mass is increased. The Vibroflot is normally suspended from a standard crawler crane.

Vibro Replacement is a technique used in soils that do not respond well to vibration alone. (too stiff, more than 15% silt) The improvement is achieved by creating columns of either crushed stone or concrete (which can be reinforced). The process enables increased load bearing, reduces settlement and even improves the shear resistance of the ground being treated.

ICE Hydraulic Vibroflots are powered by ICE power packs, and therefore more reliable and efficient than electrically powered equipment. The Vibroflot can be used in tandem where high efficiency is required.